Budget food shopping in London: A guide to the city’s supermarkets

Tesco is a giant supermarket chain that has express branches in London. Photo: Kake

While we’d love to encourage you to do all your shopping at one of London’s markets, stocking up on food in a supermarket is going to ease your budget. Britain has several huge supermarket chains, and their dominance is a big issue with London locals: many people are concerned about how they have put independent retailers out of business. But the competition between the big chains makes for brilliant deals for customers.

So once you book your London hotel, you’ll be ready to start exploring. Here’s the EuroCheapo guide to the main supermarket brands that are fighting it out for your pounds.

Tesco is the UK’s biggest chain of supermarkets — it’s estimated that £1 from every £10 spent in Britain is spent in a Tesco store. They carry a wide range of brands but seek out the ‘Tesco Everyday Value’ range for the cheapest prices (the biscuits especially win praise from customers). While some Tesco stores are huge, selling everything from tomato ketchup to TVs, in central London, you’re more likely to encounter a smaller Tesco Express store. Catering to workers, these stores are open late (usually until 11 pm) but carry a much smaller range of stock. Prices will also be slightly higher.

After Tesco, Sainsbury’s is the UK second biggest chain of supermarkets. The two chains are very similar, although Sainsbury’s has a slightly better reputation for quality. The stores often include fish and cheese counters so you can pay for exactly what you want to buy, rather than having to buy off the shelves. Sainsbury’s Locals are smaller stores, an equivalent to the Tesco Express, while ‘Sainsbury’s Basics’ is its economy range. It’s also worth checking out the ‘by Sainsbury’s range’, usually cheaper than branded products. 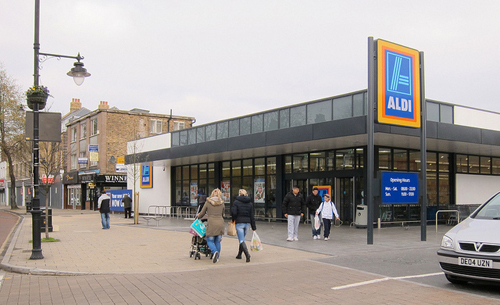 Just as the German chain Aldi is spreading across the US, it’s growing in popularity in the UK too, thanks to its wallet-friendly pricing. In fact, it was voted the country’s favorite supermarket earlier this year. You’ll tend to find Aldis outside of central London so — if you do spot one — we recommended stocking up on its excellent value own branded goods. Look out for Lidl too, another German brand proving to be a hit with British shoppers.

Asda is now the UK division of Walmart and stocks a wide range of products at reliably low prices. As with Aldi, most of the larger stores are found away from the center of London. It’s worth tracking down an Asda if you’re looking to stock up your trolley with anything other than groceries: its George range is known for selling reasonably priced, fashionable clothing and homewares.

As you’d expect from a grocery store favored by David and Victoria Beckham, shoppers at Marks & Spencer (commonly known as “M&S” or “Marks and Sparks”) like to think of themselves as being a bit posh. Marks & Spencer is actually more of a department store, selling clothes as well as groceries, but — especially at railway stations — you find ‘Marks & Spencer Simply Food’ shops that (as the name suggests) specialize in food. M&S is a pricey option for a full supermarket shop, but look out for ‘Dine In” specials offers for a cheaper evening meal option. Their readymade sandwiches and salads are equal in taste and sometimes beat on price, Eurocheapo favorite Pret a Manger.

Related: 10 ways to save on dining in London 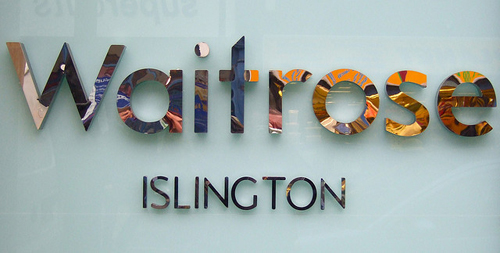 The most upscale supermarket chain in London, Waitrose also offers free daily coffee for those who sign up for a loyalty card. Photo: Paul M

Waitrose (and its smaller version, ‘Little Waitrose’) is the UK’s most upmarket supermarket chain, the kind of place that prides itself on its range of organic olive oils and artisan chutneys (there’s even a Facebook page devoted to some of its snobbier customers). Needless to say, I’d shop there all the time if I could afford it. If Waitrose is your only supermarket option, seek out their Essentials range for more affordable basics. Staying in the UK for a longer period? Apply for a Waitrose card — amongst many other deals, it entitles you to a free daily coffee from the store.